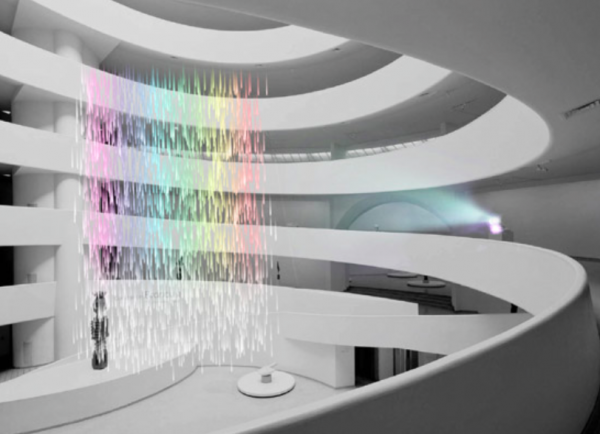 Since its opening in 1959, the Frank Lloyd Wright–designed Guggenheim building has served as an inspiration for invention, challenging artists and architects to react to its eccentric, organic design. The central void of the rotunda has elicited many unique responses over the years, which have been manifested in both site-specific solo shows and memorable exhibition designs. For the building’s 50th anniversary, the Guggenheim Museum invited nearly two hundred artists, architects, and designers to imagine their dream interventions in the space for the exhibition Contemplating the Void: Interventions in the Guggenheim Museum. Organized by Nancy Spector, Deputy Director and Chief Curator, and David van der Leer, Assistant Curator for Architecture and Design, the exhibition will feature renderings of these visionary projects in a salon-style installation that will emphasize the rich and diverse range of the proposals received. Contemplating the Void: Interventions in the Guggenheim Museum will be on view at the Solomon R. Guggenheim Museum from February 12 to April 28, 2010.

Aristotle famously pronounced that nature abhors a vacuum, an idea that still resonates in art today. In designing the Guggenheim Museum, Wright flaunted the notion of the void, leaving the center tantalizingly (or threateningly) empty. Over the years, when creating site-specific installations or exhibition designs for the building, artists and architects have imbued the space with their presences, inspiring unforgettable works by Matthew Barney, Cai Guo- Qiang, Frank Gehry, Jenny Holzer, and Nam June Paik, among others. For the building’s 50th anniversary, the Guggenheim invited scores of artists, architects, and designers to leave practicality or even reality behind in conjuring their proposals for the space. In this exhibition of ideal projects, certain themes emerge, including the return to nature in its primordial state, the desire to climb the building, the interplay of light and space, the interest in diaphanous effects as a counterpoint to the concrete structure, and the impact of sound on the environment. Conceived as both a commemoration and a self-reflexive folly, Contemplating the Void confirms how truly catalytic the architecture of the Guggenheim can be.

Submissions were received from all over the world from a wide range of artists, designers, and architects, including emerging as well as established practitioners. Among the many works in the exhibition are projects by artists Alice Aycock, FAKE DESIGN (Ai Weiwei), Anish Kapoor, Sarah Morris, Wangechi Mutu, Mike Nelson, Paul Pfeiffer, Doris Salcedo, Lawrence Weiner, and Rachel Whiteread; designers such as Atelier Ted Noten, Fernando and Humberto Campana, Martí Guixé, Joris Laarman Studio, and Studio Job; and architects such as Álvaro Siza Vieira Arquitecto, BIG (Bjarke Ingels Group), Greg Lynn FORM, junya.ishigami+associates, MVRDV, N55, Philippe Rahm, Snøhetta, Studio Daniel Libeskind, Toyo Ito & Associates, Architects, and West 8. In addition to the exhibition in the Thannhauser and Annex Level 4 galleries, Contemplating the Void will be accompanied by a comprehensive exhibition website, which will document each submission and feature introductory essays texts by Nancy Spector and David van der Leer.